Some connections are just meant to be. That seems to be the case with Cantigny Park’s McCormick House and the League of Women Voters of Wheaton. The two struck a partnership last fall, launching a Civic Awareness Series based on a common interest in encouraging local participation in the democratic process.

The series features monthly gatherings with guest speakers inside McCormick House, the former home of Cantigny’s benefactor, Robert R. McCormick. Appropriately, the proceedings take place in Freedom Hall, the mansion’s impressive library. Meetings begin at 7 pm and are free to attend, including parking. 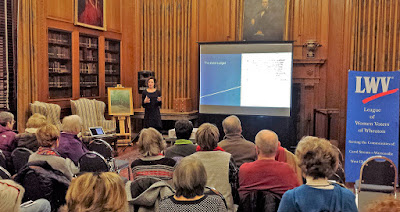 “We are delighted to be partnering with the League on this series,” said Will Buhlig, interim director of McCormick House. “Civics education and community participation were important to Colonel McCormick, so I think he’d be delighted as well. The Civic Awareness Series also fits with our goal of using McCormick House for community learning opportunities.”

Meetings so far in 2018 have covered such topics as the March 20 Illinois primary, the status and future of the Equal Rights Amendment in Illinois, and environmental issues and policy.

On May 10, Steve Schwinn, Constitutional Law Professor at John Marshall Law School, will discuss major issues facing the U.S. Supreme Court. All are welcome, but advance registration is requested due to limited seating. Register online at wheatonlwvil.org.

Complimentary coffee and dessert are offered following each month’s presentation, a format that fosters discussion and interaction.

The League of Women Voters is a nonpartisan political organization encouraging informed and active participation in government. It influences public policy through education and advocacy and does not support or oppose any political party or candidate. The League of Women Voters of Wheaton serves the people of Wheaton, Winfield, West Chicago, Warrenville and Carol Stream. Learn more at wheatonlwvil.org, where you can also RSVP for the next Civic Awareness Series event.