Over 225 attendees participated in the Democracy Schools Network Convening which took place March 8-9th in Naperville, Illinois with the theme “Informed Action for Equity”. This year, we recognized and celebrated 13 new Democracy Schools that joined the network. The Network now encompasses 67 high schools with representation in Chicago, its surrounding suburbs, the Metro East region outside of St. Louis, and both Central and Southern Illinois.

Network members and civic learning partners presented many workshops related to our theme. Pleases enjoy reading reflections from DSN members on various breakout sessions from the convening. These reflections focus on service learning, one of the six proven practices for civic learning recommended by the Campaign for the Civic Mission of Schools.

Beyond the Soup Kitchen

Beyond the Soup Kitchen addressed youth involvement in civic action projects and was presented by Jill Bass from the Mikva Challenge. This session had an excellent turnout, and began by having everyone introduce themselves by name, school district, and how they think their students would describe them in one word. Each table then had small group discussions on what it means to take informed action, what it looks like, and what it feels like. Small groups then reported out to the entire room about their discussions and Jill added examples to those topics. Topics raised included exploring root causes, the complexity of an issue, informed action, asking the right questions to students, creative problem solving, student leadership to the project, empowering students, and choosing relevant and worthwhile topics. 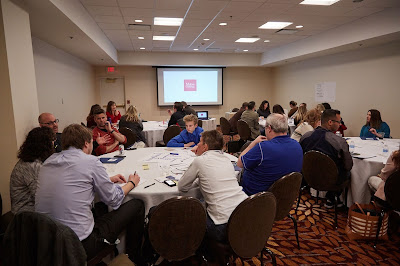 The attendees also participated in a Stand and Declare activity where participants stood by signs that read one of the four choices: “Students do alone, Students with teacher support, Teacher with student support, and Teacher does alone”. Participants were asked questions such as “Who Chooses the Topic?” and “Who chooses the strategies used in the action project?” Participants strongly agreed that students with teacher support was their response towards most of the questions. These questions provided elements to be considered when pursuing civics action projects and led to a great discussion on “What if your students choose a strategy that is doomed to fail?” Do you let them learn from the failure or guide them to a different strategy before it can fail?

Participants were also introduced to the spectrum of student voice as well as the “Three Types of Citizens” (personally responsible, participatory citizen, and justice oriented). Along those same lines was another handout with a baseball diamond that discussed the stages one can find in an action project, and how to advance the project through those stages of raising awareness, demonstrating support, directly asking decision makers, and then once making it “home,” the process of rewriting the goal. The session concluded with a sample civics action projects handout and an inspiring video of students at Mikva’s Project Soapbox. Participants walked out of the session with more knowledge, resources, and strategies for doing their own civic action projects back in their own schools. 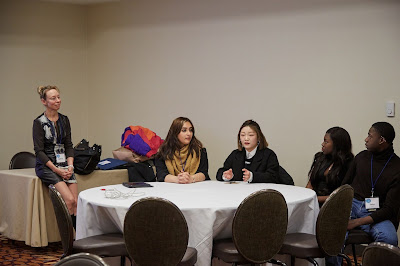 Melinda Wilson, a Dance teacher at Curie Metro High School in Chicago and four of her students led an engaging session on the growing yet silent threat to our students, Human Trafficking. The key points in this session included the alarming growth of this international threat, student risk factors, key aspects of engaged awareness in your school communities. Her personal stories, the engagement of her dance students, and their involvement was crucial in the effectiveness of this session. Melinda provided detailed lesson plans in multiple disciplines which she had available for attendees to take with them. The alarming need for awareness was also stressed. This message was necessary and starkly under emphasized in our school communities.

Actions Civics started at Belleville East when a student and an advisor (Andrea Seipp) attended an Action Civics Initiative conference in Philadelphia. After being inspired by the conference, they came back and began planning an Action Civics Club at Belleville East. Using a variety of materials provided by Mikva Challenge, and considering how best to implement ideas in their own community, the Club quickly began to identify issues that the school community faced.

One of these problems was hunger, a problem that some high school students face on a regular basis during the school week. Students began to research the root cause of the problem and brainstorm possible solutions. They learned about food banks in their area, was well as the limits that these resources had for students. Since hunger was a relevant problem in their local community, there was a strong desire to solve it for their community.

With growing student support, the Action Civics Club began collecting food and creating a food pantry in their school that would provide students with food. They developed a referral service and means to provide the goods to students that protected student identity and removed the possibility of embarrassing any student in need. Soon the Club also realized the need to provide food for students over the weekend and worked at creating a means to provide additional resources on these days so that no student in their community went hungry. They have continued to expand their program to solve additional problems that came up such as providing food to siblings of students in need and providing resources over breaks and vacations.

The Belleville East Action Civics Club provides a great example of how students can get involved in service learning and solve a problem that their immediate community is facing. The task of identifying problems, determining the root causes, researching possible solutions and stakeholders, and implementing programs to bring about change can be applied toward a variety of problems and in any school. The empowering of students and learning that takes place is a model of students taking civics education and turning it into community building. Schools can look at the process that Belleville East went through as a means to empower students to be active in solving problems in their community, an example of how using service learning can be relevant and meaningful to students, and how Action Civics can be used as a catalyst to bring about change in their school setting.

Read part 2 of this series