Over 225 attendees participated in the Democracy Schools Network Convening which took place March 8-9th in Naperville, Illinois with the theme “Informed Action for Equity”. This year, we recognized and celebrated 13 new Democracy Schools that joined the network. The Network now encompasses 67 high schools with representation in Chicago, its surrounding suburbs, the Metro East region outside of St. Louis, and both Central and Southern Illinois.

Network members and civic learning partners presented many workshops related to our theme. Pleases enjoy reading reflections from DSN members on various breakout sessions from the convening. These reflections focus on addressing civic learning across the curriculum, a key component of being a Democracy School.

A day filled with educators creating conversations about democratic ideals and what it means to be a civically engaged citizen led educators to present about their areas of expertise. The Robert R. McCormick Foundation’s Democracy Schools Network facilitated academic sessions where professionals created authentic conversations with educators. On Friday, March 9th Heather VanBenthuysen, Civic Education Manger at Chicago Public Schools, delivered a presentation on the power of media literacy.

VanBenthuysen began her presentation with an inquisitive question, “Why is media literacy important?” Her audience, educators, began to consider how media is used in society and how they have conversations with their students about media. VanBenthuysen led her audience into a conversation about how to support students to create ethical media literacy with a resounding message, “Simply producing media is not media literacy.” There is a need to teach students how to verify information to counter fake news. The room began to write down her message, shared ideas with their fellow teachers by questioning how they teach their students about using media purposefully.

Beyond the profound messages about teaching media literacy, VanBenthuysen also discussed how to support students in understanding tacit messages in today’s media through rhetorical analysis. VanBenthuysen said, “All media messages have a purpose” and it is the job of educators to help students understand the underlying messages. Her discussion about the purpose behind media and using Aristotle’s rhetorical triangle led the audience to learn methods how to interpret media.

Through a powerful presentation about media literacy, VanBenthuysen concluded her conversation with a room full of educators with a message: “Media literacy is not only about teaching media ethics, but teaching students how to employ those ethics.” 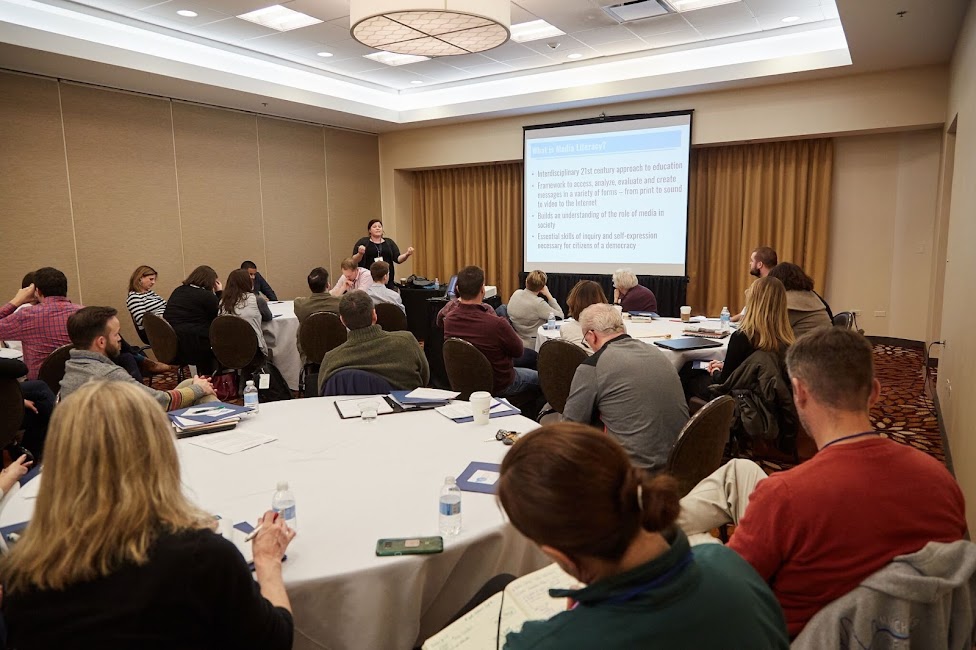 Climate Change was the subject of the presentation made by Mark Mesle at the recent Democracy School Convening. Mark made us all aware that “climate changes is more than melting ice caps and the plight of polar bears”. Climate change has resulted in a wide range of complex problems that affect countries and individuals around the world today.

According to Climate Central, “2017 finished as the third – warmest year since records began”. In fact, the top ten hottest years globally have been within the life time of most high school seniors. As the impacts of climate change become more pronounced, it will become a topic that finds its way into more and more classroom discussions. Climate change is not just a scientific issue but an economic issue, a social justice issue, a public health issue and a civics issue with local and international consequences.

Climate change contributes to economic and political instability and also worsens the effects. According to Jessica Benko, in “How a Warming Planet Drives Human Migration,” “It propels sudden-onset disasters like floods and storms and slow-onset disasters like drought and desertification; those disasters contribute to failed crops, famine and overcrowded urban centers; those crises inflame political unrest and worsen the impacts of war, which leads to even more displacement.”

In Chicago over the past century, downpours that force human waste up pipes and into homes — storms that dump at least 1.5 inches of rain in a single day — have struck the city more often. Annual precipitation in the Midwest grew about 20 percent during the past century. Rains of more than 2.5 inches a day are expected to increase another 50 percent in the next 20 years. That means more flooding—and more clean-up costs. Yet, sadly, the United States is the only country to not join the Paris Climate Accord.

According to a report released by National Geographic, “Extreme weather, made worse by climate change, along with the health impacts of burning fossil fuels, has cost the U.S. economy at least $240 billion a year over the past ten years. And yet this does not include the three major hurricanes or 76 wildfires in nine Western states. Those economic losses alone are estimated to top $300 billion, the report notes. Putting it in perspective, $300 billion is enough money to provide free tuition for the 13.5 million U.S. students enrolled in public colleges and universities for four years.”

The multidisciplinary study of the political, social, scientific and economic effects of climate change is an opportunity for students to take action on an important issue.

Read part 2 of this series

Read part 4 of this series