Census 2020: The Stakes Couldn’t Be Higher for Illinois

Every 10 years, Americans are asked to fill out and return their Census questionnaires. It's an important decennial event, given that population counts guide billions in federal spending, determine congressional apportionment, and play a key role in shaping future policies.

Yet vast segments of the population often fail to respond. Greater racial and ethnic diversity, more nontraditional living arrangements, elevated poverty rates and a litany of other factors are also putting more people at risk of not being counted in 2020. These challenges, alongside other national administrative concerns, have major implications for residents and communities in Illinois.

The Census Bureau’s goal is to “count everyone once, only once, and in the right place,” but this is easier said than done. According to the Funders Census Initiative 2020, during the 1940 Census, 453,000 more men registered for the military draft than were reflected in the census. And while this disparity equated with only 3% of white men ages 21 to 35, it rose to 13% for black men in the same age cohort.

In 2010, the Census Bureau overcounted whites by 0.83%, but undercounted Black Americans by 2.06%, meaning that Blacks ceded 3% of their representation to whites. Communities of color are considered hard-to-count (HTC), as are low-income households (equated with renting) and young children.

When undercounted, HTC communities lose out on political representation, government funding, and even private investment. According to the George Washington Institute of Public Policy, $800 billion of federal funding supporting 300 programs is appropriated annually to states based on census counts. Due to Illinois’ undercount in 2010, the state lost $952 per person of federal funding. In 2015 alone, Illinois lost $122 million for every 1% of the population we failed to count.

The Center for Politics at the University of Virginia reports that Illinois has lost six congressional seats since 1960 as a result of slow or declining population growth. They predict the loss of at least one additional seat in 2020. Texas, by comparison, has gained 13 seats since 1960 and is projected to add three more in 2020.

It is widely known that Illinois is losing population in recent years, with losses most pronounced outside of metropolitan Chicago. In fact, 89 of Illinois’ 102 counties have experienced population loss from 2010 through 2017. Rockford, Kankakee, Decatur, and Metro East (suburban St. Louis) have been particularly hard hit, while Lake County is the only Chicago area county with a shrinking population.

Given the stakes of Census 2020, it’s imperative that we identify and mobilize HTC communities in Illinois. HTC 2020 is a tool developed to identify HTC’s and reports that 80.7% of Illinoisans completed their mail-in census forms in 2010, meaning more resource-intense, in-person follow-up for the remaining 19.3% in needed for the 2020 Census. The Census Bureau projects that 16% of our state’s population is HTC, and that 18.1% of households have access to the Internet when administration of the census is moving mostly online.

While HTCs are most prolific in the city of Chicago, there are pockets throughout the suburbs and Northern Illinois (see below). HTCs in Central Illinois include Peoria, Springfield, Bloomington-Normal, Decatur, and specific tracts in Metro East. In Southern Illinois, Carbondale, Cairo, and large portions of Pulaski County qualify as HTC. 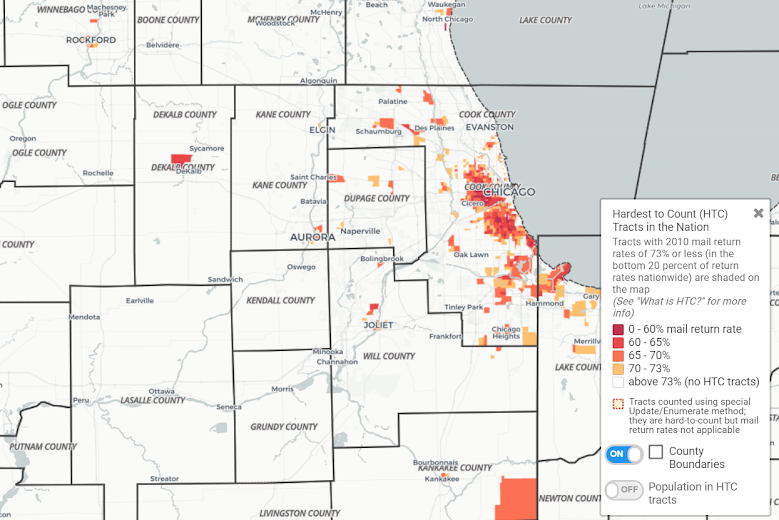 Illinois’ demography presents significant challenges for Census 2020. The stakes are high politically and financially. We must all do our part to reach HTC’s, ensuring an accurate count of all Illinois’ communities.

In order to ensure that HTC’s are accurately represented in the 2020 Census, we must: