On August 21, 2015, Illinois Governor Bruce Rauner signed bipartisan legislation requiring high school students to successfully complete a semester of civics prior to graduation. The law took effect at the beginning of the 2016-2017 school year, but the McCormick Foundation’s leadership and support of course implementation efforts began upon passage.

Teacher professional development is central to the #CivicsIsBack Campaign given the new course requirement and the proven civic learning practices embedded within. These include structured discussions of current and controversial issues, service learning, and simulations of democratic processes. Prior to passage of the law, four in ten high schools offered a civics or government courses, but had no requirement in place, and 13% didn’t offer even an elective course under the umbrella of civics.

#CivicsIsBack is truly a statewide effort. While two-thirds of high school students reside in in Chicagoland, 60% of Illinois’ high schools are located throughout the rest of the state. In order to meet the needs of all teachers, schools, and districts, we knew that regional institutional partners were imperative as sites for professional development and trusted local partners that had existing relationships with teachers. These sites are scattered across the state and include colleges, universities, and regional offices of education.

Thirty-eight veteran civics teachers were recruited in every educational region outside of Chicago Public Schools, to act as mentors for schools and educators needing support to implement the new requirement. Additionally, these mentors were also paired with Lead Mentor Mary Ellen Daneels to deliver regional summer workshops and more localized sessions for schools and districts throughout the school year. Since October 2015, the McCormick team and Teacher Mentors have provided a combined 1,252 hours of professional development to 8,937 Illinois teachers.

Chicagoland has an abundance of civic learning programs and resources. Through the Campaign, we sought to provide a larger platform for these organizations to share their resources outside of northern Illinois. These organizations helped to train Teacher Mentors and adapted their curriculum and resources for them to disseminate with colleagues, schools, and districts in their respective regions. Core partners are the Constitutional Rights Foundation Chicago, Facing History, Mikva Challenge, News Literacy Project, and We Schools.

The Foundation is also deeply committed to the city we call home, and are a proud supporter of Chicago Public Schools (CPS) Office of Social Science and Civic Engagement. CPS has built the nation’s preeminent civic learning program for a large, urban district. The district has designed a year-long civics course, Participate, in alignment with the law, that is now offered in nearly all of the district’s 92 high schools.

Thanks to the leadership of CEO Janice Jackson, CPS has also scaled student voice committees (SVCs) in all of the district’s high schools and an increasing number of elementary schools that serve the middle grades (6-8). SVCs convene a cross-section of students to discuss issues of common concern in their school. They meet regularly with building administration to determine if and how they can be resolved.

The #CivicsIsBack Campaign has partnered with the Center for Information Research on Civic Learning and Engagement (CIRCLE) to study of the impact of our comprehensive implementation efforts. This includes the fidelity by which teachers, schools, and districts have implemented the law, the impact of our teacher professional development offerings, and ultimately, students’ exposure to proven civic learning practices and related civic engagement outcomes.

Students enrolled in civics courses were significantly more likely to report discussing current events and controversial issues, including issues they care about personally, and to consider multiple viewpoints with respect to these issues (see graph below). 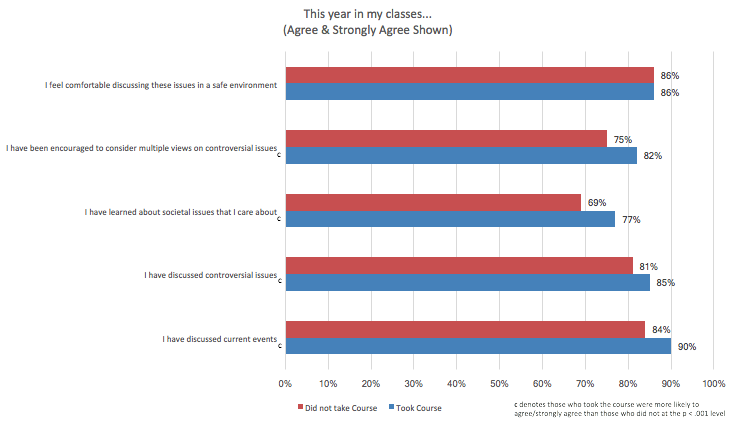 Civics course participants also demonstrated strong information literacy skills, were better able to determine the trustworthiness of a news source (92% to 88%), identify political bias in online information (89% to 81%), and create or share something online related to a social issue (48% to 36%).

These students also have stronger civic values, including a responsibility to be concerned about state and local issues, to believe that they can make a difference in their communities, and to exhibit trust in fellow community members (see graph below). 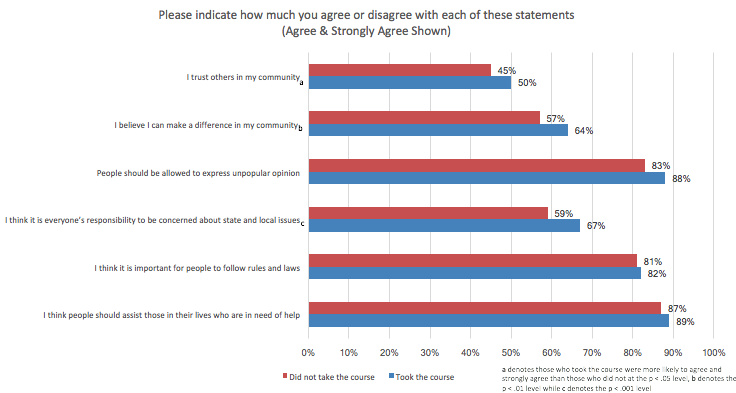 Finally, students in civics courses feel more knowledgeable about and skillful in participating in politics (62% to 46%), but they are much more likely to report engagement in a range of civic behaviors:

The #CivicsIsBack Campaign concludes in June 2019, but our efforts to strengthen school-based civic learning in Illinois are ongoing. In the coming year, with our partners at the Florida Joint Center on Citizenship, we will launch a free online course series centered on proven civic learning practices where participants can earn microcredentials in each. We also plan to advocate for integration of civic learning into the middle grades via state legislation. And finally, the Democracy Schools Initiative will release revised civic assessment tools to assist schools in strengthening civic learning across the curriculum, in extracurricular activities, and in the organizational culture of the institution as a whole.