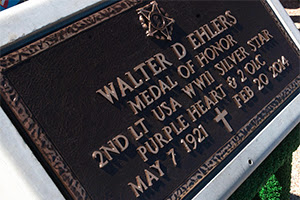 On Saturday, March 8, 2014, Staff Sergeant Walter D. Ehlers, an honorable man, soldier, mentor and Medal of Honor recipient, was laid to rest at Riverside National Cemetery near Los Angeles, CA. Among the many dignitaries who came to pay their respects were about a dozen Medal of Honor recipients. Staff Sergeant Ehlers received his Medal of Honor for conspicuous service above and beyond the call of duty on June 9 and 10, 1944, in Normandy, France, just past deadly Omaha beach, which he had crossed on D-Day, June 6. Walt was a devoted veteran of the 1st Infantry Division and a friend of our First Division Museum at Cantigny Park in Wheaton, Illinois. We owed him this final farewell. The weather was beautiful, the setting sublime, the eulogies touching, the 1st Division honor guard perfect. 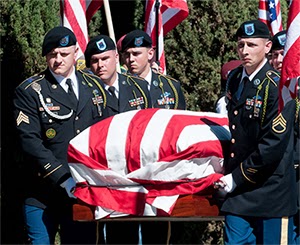 The day was not about the Medal but the man. Walt fought in many campaigns besides Normandy, and was wounded and decorated many times. Walt was proudest of getting his squad over Omaha beach without losing a man. His Medal was awarded in part for placing himself between the enemy and his troops. He carried one of them, wounded, to safety. After the war, his long life was exemplary – humility, faith, patriotism, devotion to family, service to fellow veterans, good humor, kindness and generosity, decency in large measure. We owe so much to men like Walt. His courage, their courage, ensured that our lives have been free of the terrible dangers of their day. We must do likewise in our day. There is no adequate “Thank you” beyond striving daily for our best ideals, to be a people, a community, and a country worthy of such service. Walt’s life was like that – living out his “Thank you” to his brother Roland, also a 1st Infantry Division soldier, who was killed in action on D-Day on that same Omaha beach. Rest in peace, Walt. Roland is proud of you, and we’ll take it from here - we promise.