by Phil Zepeda, Director of Communications

Thanks to a grant from the Robert R. McCormick Foundation, visitors to the Chicago History Museum (CHM) will now get a chance to step into the newly renovated, state-of-the-art Robert R. McCormick Theater, which was designed in keeping of the historical style of the original auditorium.

The theater features a dynamic new film presentation entitled “The Great Chicago Adventure” that transports visitors through major events in Chicago’s history. Feel the intensity of the Great Chicago Fire and splendor of the World’s Columbian Exposition. Explore the sights of bustling Maxwell Street in the 1950s and peer down from an I-beam of the Sears Tower in the 1970s. Relive Chicago sports victories and cheer on President Obama during his Grant Park victory speech. 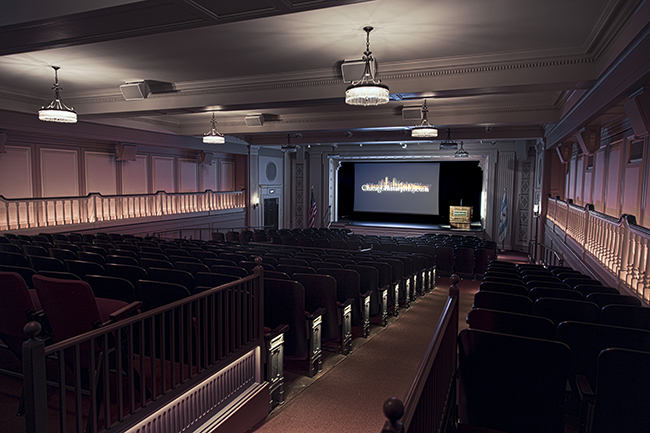 New audio, lighting, and video equipment bring the theater’s technology to the cutting edge of the 21st Century, led by the installation of a 4K digital projector and supporting playback devices. Most commercial cinemas with digital capabilities operate 2K projectors. Only a small number of Chicago cinemas currently have 4K projectors, which double the number of pixels across the screen for ultra-realistic high definition imaging. CHM’s new 4K projector will also output at 22,500 lumens, an impressive cinematic level.

On Saturday, July 4, leadership from the Museum along with its closest friends and supporters gathered for the theater’s dedication and the official inaugural screening of the film.

“It’s an honor for the McCormick Foundation to be part of such a tremendous museum that educates and entertains people through the stories that make Chicago a great city,” said David Hiller, President and CEO of the Robert R. McCormick Foundation. “It is our hope that everyone coming to Chicago gets to experience this updated theater in all of its glory.”

The film runs 27 minutes; admittance is free with Museum admission.