I’ve had a streak of turning social gatherings into social surveys: how do you get your news, what are your news interests, are you satisfied? Fortunately (for any future hosts of mine), winter has brought new news on news views to answer some of my questions. Three recently released studies highlight major challenge news outlets face as they seek to build readership, and revenue, to sustain their democratic function.

In December, the Poynter Institute reported a tepid 49% public confidence in the press. Unpacking the data revealed a 55-percentage point gap between Democrats’ and Republicans’ confidence, with 74% of Democrats expressing a great deal or fair amount of confidence in media reporting. Only 19% of Republicans felt similarly.

In mid-January, a Gallup/Knight Foundation survey on Trust, Media, and Democracy reinforced our polarized orientation to the news: 54% of Democrats, compared to 15% of Republicans, have a very or somewhat favorable opinion of the news media. Nevertheless, Democrats (90%) and Republicans (79%) agree the news media is critical or very important to our democracy.

Most recently, the Center for Media Engagement, with support from the McCormick Foundation, released the Chicago News Landscape Survey. Rather than partisan polarization, this study highlighted differences in how residents on Chicago’s North, South, and West Sides view the news. For example, when asked about neighborhood news coverage, North Siders were significantly more positive: 29% of them strongly agreed the news was doing a good job covering neighborhoods. By contrast, half as many West Side and South Side residents strongly endorsed neighborhood news. 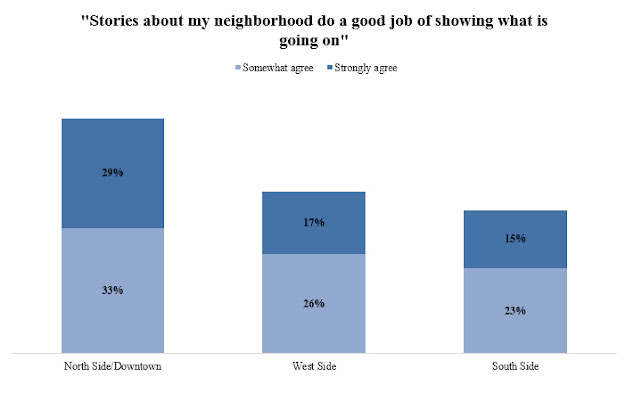 Each study reveals valuable insights into how consumers differ in their perceptions of the news. The Gallup/Knight study surveyed 19,000 Americans, giving them a powerful sample size to draw conclusions across several variables (age, education, race/ethnicity, state of residence). The Center for Media Engagement study also considered readership revenue models, residents’ top issues, and types of news sources, among other questions.

There is a lot to draw from these studies, but they also raise more questions. What's needed to build broader trust in media, irrespective of geographic, age, or ideological diversity? More outlets, more reporting, more focused reporting, or all of the above and more?

Especially as readers struggle with the amount of information already available (58% of Americans think it's now harder to be well-informed because of the increased quantity of news sources), I wonder what a more community-oriented news ecosystem looks like and how much "more" is really the answer. Perhaps it's a new approach to reporting, and some more of all of the above (outlets, reporters, etc.), but especially more community engagement in both reporting and delivering the news.

But what faith can we have that more of anything will move the needle on trust in media? I took some small comfort in a conclusion the Poynter study drew. In addition to their survey, the investigators were also able to examine about a month of respondents' internet browsing history and they found people's news consumption was more diverse than reported. While still polarized, it indicates consumers might not be so entrenched in their echo chambers that hope it futile.