This article is the first in a series written by the McCormick Foundation’s Veterans Program, introducing topics that have impacted the Veterans Community in 2020. This article introduces the issue of food insecurity in the veteran community.

Due to the COVID-19 public health crisis, the Jesse Brown Veterans Affairs (VA) Medical Center had been closed for non-essential operations, including its food pantries, one of the first of its kind to open back in 1996. In response to the closure, a grassroots group of active veterans led by the Travis Manion Foundation began conversations to discuss emerging issues including food insecurity and how to reopen the facility.

Hosted by the nearby First Immanuel Lutheran Church, a little more than a mile from the original location of the food pantry, the local community joined with veterans to provide prearranged food bags for veterans and nearby residents. Since May, the group has gathered on five occasions (with a sixth planned for late August) to provide 40,000 pounds of food to more than 1,500 families, with two-thirds identifying as having a veteran in the household. With the continued support of the Robert R. McCormick Foundation, the temporary food pantry will provide for this critical need through early fall. 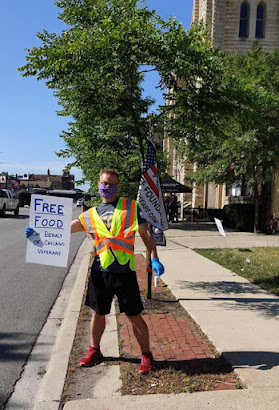 Before the closing, clients at Jesse Brown would meet with a trained registered dietician to develop and provide comprehensive, evidence-based nutritional services to veterans and their families. While these efforts have gone a long way toward veterans' health outcomes, food insecurity remains a prevalent issue.

While many efforts have been made to meet the increased demand for nourishment, these efforts are, at best, a band-aid and leave many veterans with their dietary needs unmet. A 2017 study by the Department of Veterans Affairs identified that nearly 1.5 million veterans currently live below the federal poverty line. An additional 2.4 million veterans are living paycheck to paycheck at less than 200 percent of the federal poverty level.

There are a few groups in the veteran community that struggle more than others. A study by Cambridge University Press found 27 percent of Iraq and Afghanistan veterans report being food insecure while 11 percent report being severely insecure or vulnerable. A Women's Health Issues study noted a "prevalence of food insufficiency among women veterans was 27.6 percent," which was associated with delayed access to health care and worse health outcomes. Compare this to a 2018 USDA study that found with 11 percent of American households saying they were food insecure and four percent had very low food security, this is a glaring issue. Additionally, the SNAP Retailer Management 2015 Annual Report indicates that more than $80.2 million was spent at military commissaries during the same period, suggesting that many veterans and military families are also facing food insecurity issues.

While this temporary measure to address food insecurity at Jesse Brown has been beneficial, ongoing support is needed. They continue to screen all clients who visit its healthcare facilities for hunger, asking whether they've struggled to afford food in the past three months. With assistance from community partners, the VA aims to identify a plan of how to meet the needs of food-insecure veterans with the new realities of the pandemic. The McCormick Foundation Veterans Program remains committed to helping them find a solution so no one worries where their next meal is coming from.