My Way to Olympia

On July 26, 1990, our nation committed itself to eliminating discrimination against people with disabilities. The American Disabilities Act (ADA) celebrates 25 years since the passage of this historic mandate. To honor the ADA and raise awareness of barriers still faced by individuals with disabilities, the Robert R. McCormick Foundation, in partnership with WTTW/Channel 11, is hosting a McCormick Community Screening at the Chicago History Museum (CHM) featuring the film My Way to Olympia on November 16. 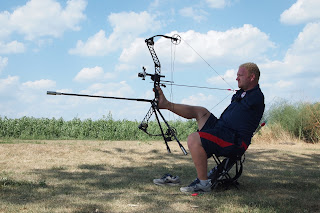 This award-wining documentary, directed and produced by Niko von Glasow’s, a disabled filmmaker, follows a group of disabled athletes preparing for London's Paralympics competition. Born with severely shortened arms, von Glasow serves as an endearing guide to London’s Paralympics competition. As he meets a one-handed Norwegian table tennis player, the Rwandan sitting volleyball team, an American archer without arms and a Greek paraplegic boccia player, his own stereotypes about disability and sports get delightfully punctured.

The Chicago History Museum acts as the perfect backdrop for this program. Since June, CHM has been hosting an exhibition, Access for All, featuring images by renowned disability rights photographer Tom Olin. The nineteen framed prints, on loan from the permanent art collection at Access Living, depict the activists who brought about the landmark Americans with Disabilities Act in July 1990.