Young people participate in our democracy when they have the capacity, connections, and commitments to follow through. School-based civic learning is a critical contributor to this equation, and Illinois Governor Rauner’s recent signing if landmark civic education legislation is reason to celebrate. Also critical to youth civic development are real-world opportunities to contribute to democratic rituals like elections.

The Chicago Lawyers’ Committee for Civil Rights Under Law connected the two in their “Student Leaders in Elections” program that spanned three elections over the past two years. They collected more than 3,500 applications to serve as election judges from college students throughout the Chicagoland region. Nearly half of them served as judges in at least one election, and more than too worked two or more elections.

A follow-up case study published last month produced generalizable findings that contribute greatly to our understanding of the recruitment of students as election judges and the value they bring to election administration. A few findings are worthy of highlighting:

These findings speak to the value of the Student Leaders in Elections program and the need to sustain and grow it further. It goes without saying that the students themselves benefit for serving as vital cogs in the machinery of our democracy, and they are actually compensated for their efforts. Here’s hoping that programs like Chicago’s attract continued and new sources of public and private funding, and that the findings of the Chicago Lawyers’ Committee inform their development. 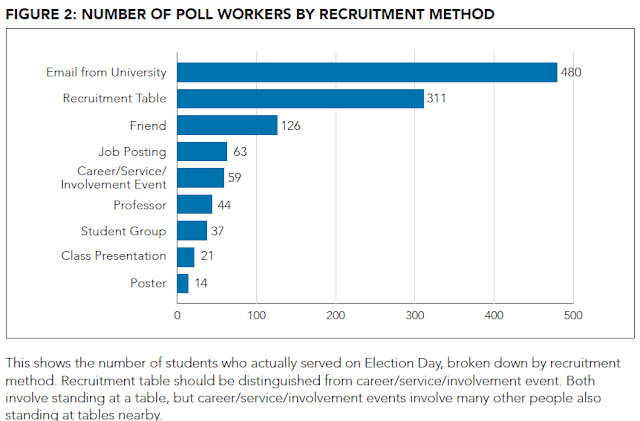